Semâ being a part of the traditions and beliefs in Turkish history, is developed with the Rumi’s (1207-1273) inspiration. It presents a spiritual journey to perfection (Ascension), there and back.

In Semahanes (meaning the hall where the ceremonies are held), the musical groups called “mutrip” is formed of the musicians (Neyzen: player of the oriental flute, Kudümzen: player of the small double drum, Ayinhan: the choir and the Naathan: reciter of Koranic passages). The pieces composed by the dervish composers to accompany the semâ and played by the musical group during the ceremony in dervish lodges are called Mevlevi (meaning whirling dervish in English) rites.

The main parts of these pieces are formed of the Persian poems made with the Mesnevi or Divan-ı Kebir of the Rumi. This music is very important in the history of the Turkish music and it is also a well-preserved composition and performance within Sufi style music in the world.

There is a Sheikh Skin right at the opposite to the entry of the Semahane. It is believed that there is a holy line called “Hatt-ı Istiva” (equator in English) between the Skin and the entry and it divides the semahane into 2 semicircles. The whirling dervishes cross this line without stepping on it and turning their back. The red skin is the greatest spiritual seat, its color represents the birth and existence. The mutrip and whirling dervishes first salute the Sheikh Skin and then take their seat and the Semâ Ceremony starts.

When we consider the Semâ in terms of science; the fundamental rule of existence is whirling. All of the beings from the tiniest particle to the furthest star have a common characteristic; the electrons and protons in their atoms whirl. And as the atoms in the human body whirl, the blood moves whirling in the body, the body comes and returns back to the earth, the world itself whirling, the humans also whirl naturally and unconsciously. However, the human has the mind making her/him different and superior than the other beings. Here the whirling dervishes put also their mind into Semâ along with the whirling of the beings.

Semâ is dissolution of the soul in the truth and is turning back as a mature, perfect human being. It is turning back into the whole being, into all created beings with a new role and to serve for love. When the whirling dervish takes off his cloth, he is born into the spiritual and eternal world, into the truth and continues his path in there.

Their hat represents the tombstone of the self, their cloth represents the shroud of the self. They cross their arms; represent number “one” and confirm the unity of the God. When they whirl, they keep their arms open, their right hand facing the sky as like praying and their left hand which they looked at with the eye of the God facing down the earth. They share their benevolence taken from God with the people. They whirl from right to the left around the heart and embrace all people, all created beings with their heart, with love. The Semâ ceremony is formed of 7 parts. Each part has a different meaning as following:

1. First Part: It starts with the “ma't” composed by Itrî. It praises our prophet who represents the holy love. It is called “Na't-ı Şerîf” meaning to praise the prophet, other prophets and the God created all.

2. Second Part: After this encomia, the kudüm beat is heard. This beat represents the God’s order of “Kün” (meaning “be” in English) during the creation of the universe.

3. Third Part: Ney is played representing the “breath” which perished all beings.

4. Fourth Part: It is the part of the Sultan Veled. The whirling dervishes salute each other three times and walk in a cycle with prelude. It is the greeting of the secret soul to the other.

5. Fifth Part: Semâ ceremony is of 4 salutes. The whirling dervish takes of his black cardigan symbolically born in the truth. He crosses his arm as a presentation of the one. So, he testifies for the unity of the God. He kisses the hand of the Sheikh and takes permission to join the Semâ and starts.

a. 1st salute is for the realization of the God and his own slavery by being born in the truth with the knowledge.

b. 2nd salute is for admiring for the God’s power by observing the order and the magnificence in the creation.

c. 3rd salute: By transformation of the admiration and gratitude to the love, the mind is sacrificed for the love. It is the complete surrender. It is the union with the God. It is dissolution in the lover. It is as the highest level of nirvana in Buddhism. It is “Fenâfillâh” in Islam. But, the slavery is the highest level in Islam.

d. 4th salute is for completing the spiritual journey, accepting his faith and returning to his mission in creation; slavery. The Sheikh and the head dervish also participate into this salute. At this stage, the whirling dervish is happy to believe in the God, the angels, the holy books and the prophets. It is lost in the joy and realization of the divine orders and the reasons of the creation. He overcame his self, his ego and followed the orders of the Prophet and the Quran.

After the Semâ ceremony, the dedes, dervishes withdrew their cells for meditation without talking to anyone.

6. Sixth Part: It is part in which the Quran is read.

7. Seventh Part: The Semâ ceremony is finalized with prays to the souls of the prophets, martyrs and all believers. 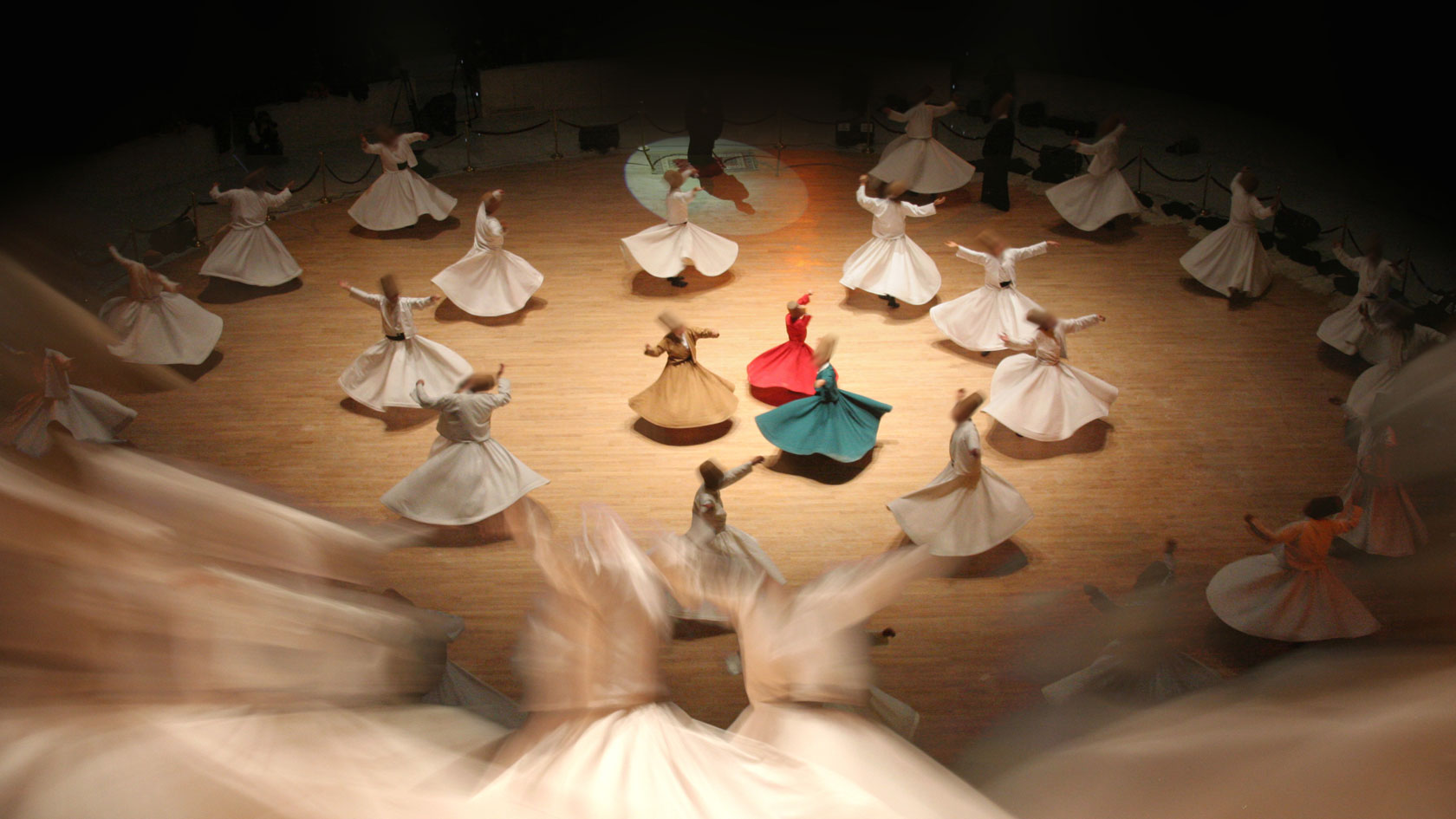