The Aizanoi ancient city is located in the inner Western Anatolia Region, 48 km Southwest of the Kütahya Province, and within the boundaries of the Cavdarhisar district. Today, it is approximately at a 1000-1050 m altitude in the flat treeless plateau which is known as Orencik Plain. The City was located approximately 40 km Southwest of the Cotiaeum, 25 km Northeast of Cadi, 40 km Northwest of Appia, West of Alia and on the edge of the River Rhyndakos.

The city was re-discovered by the European travellers in 1824 and surveyed and identified between the years of 1830 and 1840. The scientific excavations within Aizanoi were launched in 1926 by D. Krencker and M.Schede on behalf of the German Archeological Institute and presently the excavations works are being carried out by the Pamukkale University.

Aizanoi was the capital of Aizanitis, who belonged to Phrigia. There was less information about Pre-Roman period for Aizanoi. It is said that the early settlement in the region dates back to the second millennium BC. During the excavations carried out around the Zeus Temple, settlement layers dated to the third millennium were unearthed. Aizanoi acquired importance in the political sense, during the conflict between the Bithyniaand PergamonKingdoms. During the Hellenistic Period, Aizanoi was alternated between the hegemonies of the Pergamon and Bithynia Kingdoms and then came under Roman control in 133 BC. Phrygia Epictetos which consists of Aizanoi, Nacoleia, Cotiation, Midaion, Doryleion, Cadoi minted their own coins after 133 BC. This case shows that Aizanoi was in metropolis statue in the first century BC. However, big monumental public buildings and urban infrastructure in the city were constructed during the early imperial period. During the Roman Period Aizanoi was not only one of the most important cities in the Phrgyia Region but also had an important status as a commercial road network. Through its production of cereals, wine and sheep's wool the city was to rise to prosperity during the period of the Roman Empire.Since the intensive architectural development activities were realized especially in the 2nd and 3rd centuries AD., the local stone workshops gained importance during that period. Because of the religious and political power of Aizanoi, Rome provided an important relationship with the communities in the region. During the early Byzantine Period, the city was the seat of a bishopric and it had lost its importance after the 7th century. In medieval times the hill upon which the temple stands was transformed into a fortified citadel which subsequently served a group of the Cavdar Tatars as a fort of Seljuk dynasties, thus giving the community its present name, Cavdarhisar.

The visible remains of the city are mostly derived from the period of the Roman Empire. The city has significant remains such as the Zeus Temple, the Complex of Stadium-Theatre, Macellum, Portico Street, the bridges and dam, two necropolises, odeon, the Roman Baths.

Aizanoi is one of the most significant cities of the Roman Period with the Zeus Temple, the Complex of Stadium-Theatre and the Macellum.

The structure of the Temple which is one of the best preserved Zeus Temples in the world. The Temple of Zeus, situated upon a hill, was the city's main sanctuary.There is an area covered with vaults under the temple. The temple has an unusual feature in Anatolia with this plan. The temple is composed of pronoas, naos, opisthodomos and a vaulted room under the basement. The distance between the columns and the walls of the inner rooms is twice as much as the distance between the columns; that means the building is a pseudodipteros. Since the space surrounded by the columns in the temple is marble-covered, the Zeus Temple in Aizanoi is unique in the pseudodipteros plan. The other temples in this plan have a wooden roof cover. Covering the ancient inscriptions and ashlar masonry of the temple are simple representations of riders, combat scenes and horses. These engraved images depict episodes from the life of the Cavdar Tatars in the 13th century, who lived within the citadel walls surrounding the temple plateau. The magnificent Temple of Zeus contributed much to the city's prominence in antiquity and it is among the rarest ancient buildings in Anatolia which have survived till today by preserving its original form. The Complex of Stadium-Theatre is located in the north part of the city and was one of the most intensive development activities in the city during the Roman Period. The stadium with a capacity of 13500 people and the theatre with the capacity of 20.000 people were constructed adjacently and as such it is unique in the ancient world.

One of the first stock exchange markets of the world was established in Aizanoi. The Macellum (Round Building) is dated to the midst of the 2nd century AD., probably serving as a food market. Inscriptions on the walls of this building show the prices of all goods sold in the markets of the Imperial that were controlled by an edict issued in 301 A.D. by the Roman Emperor Diocletianus in order to fight the inflation in that period. The inscriptions survived till today and can be read completely at present. It can be understood that Aizanoi was a cradle of trade with such as the most significant inscription.

Criterion (ii): The Macellum in Aizanoi dated to the midst of 2nd century AD is one of the first exchange stock markets in the world. Inscriptions on the Macellum showing the prices of all goods sold in the markets of the Imperial survived till today and can be read completely. These inscriptions have been used as a reference source for the other similar inscriptions unearthed during the excavations.

The structure of the Temple is one of the best preserved Zeus Temples in the world. There is an area covered with vaults under the temple. The temple has an unusual feature in Anatolia with this plan. Since the space surrounded by the columns in the temple is marble-covered, the Zeus Temple in Aizanoi is unique in the pseudodipteros plan. The other temples in this plan have a wooden roof cover. The temple is among the rarest ancient buildings in Anatolia which have survived till today by preserving its original form. 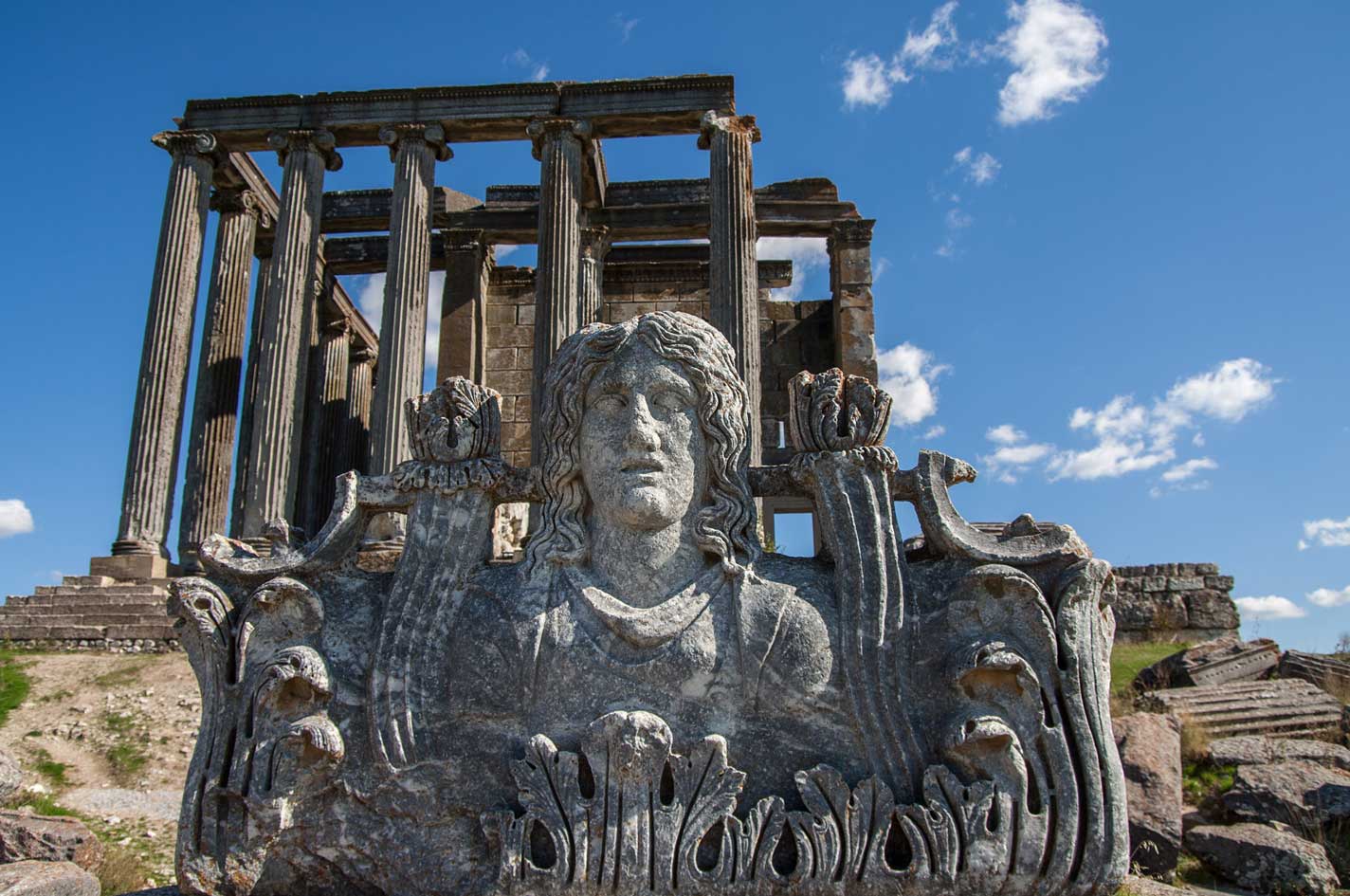 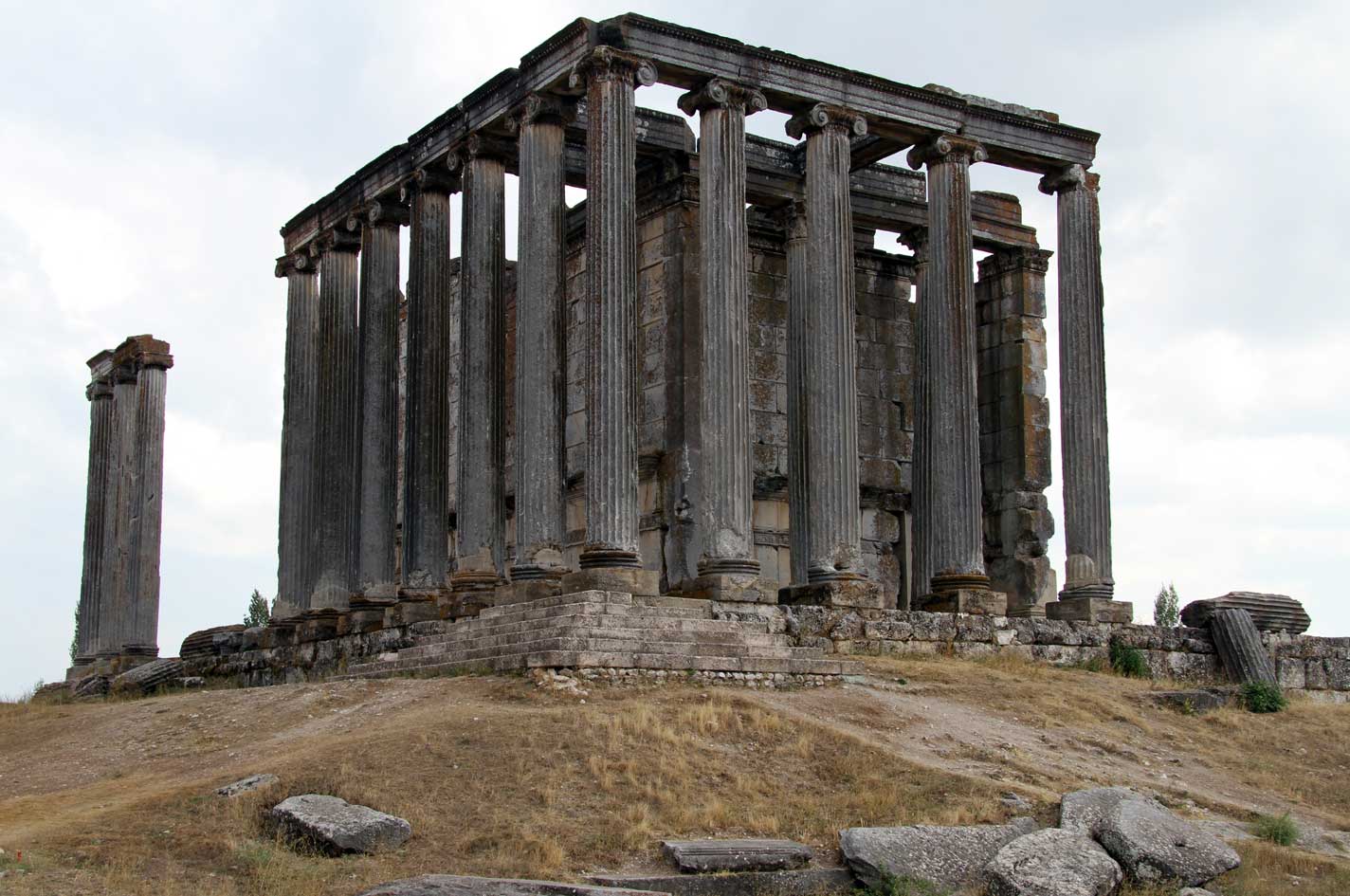 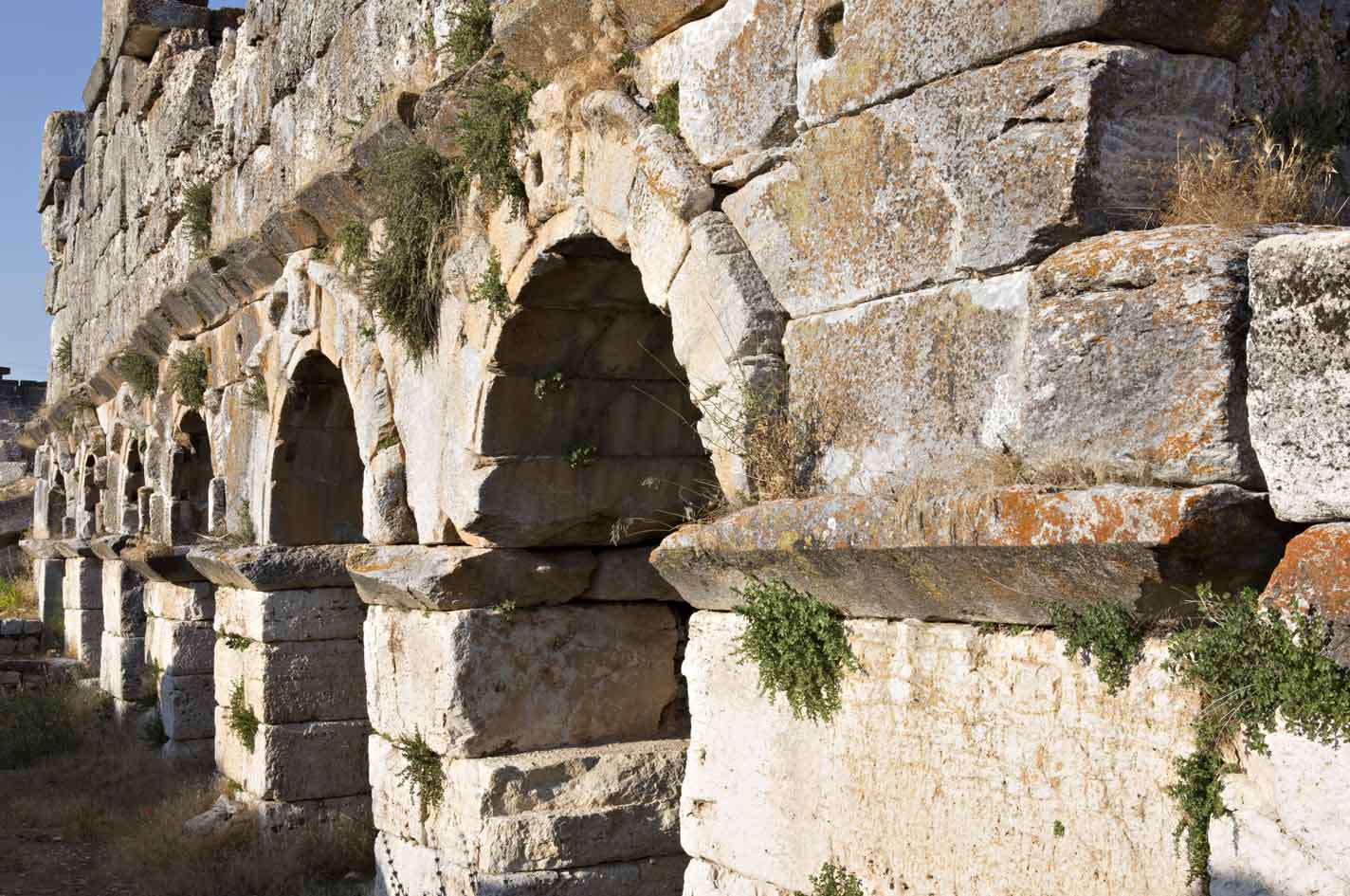 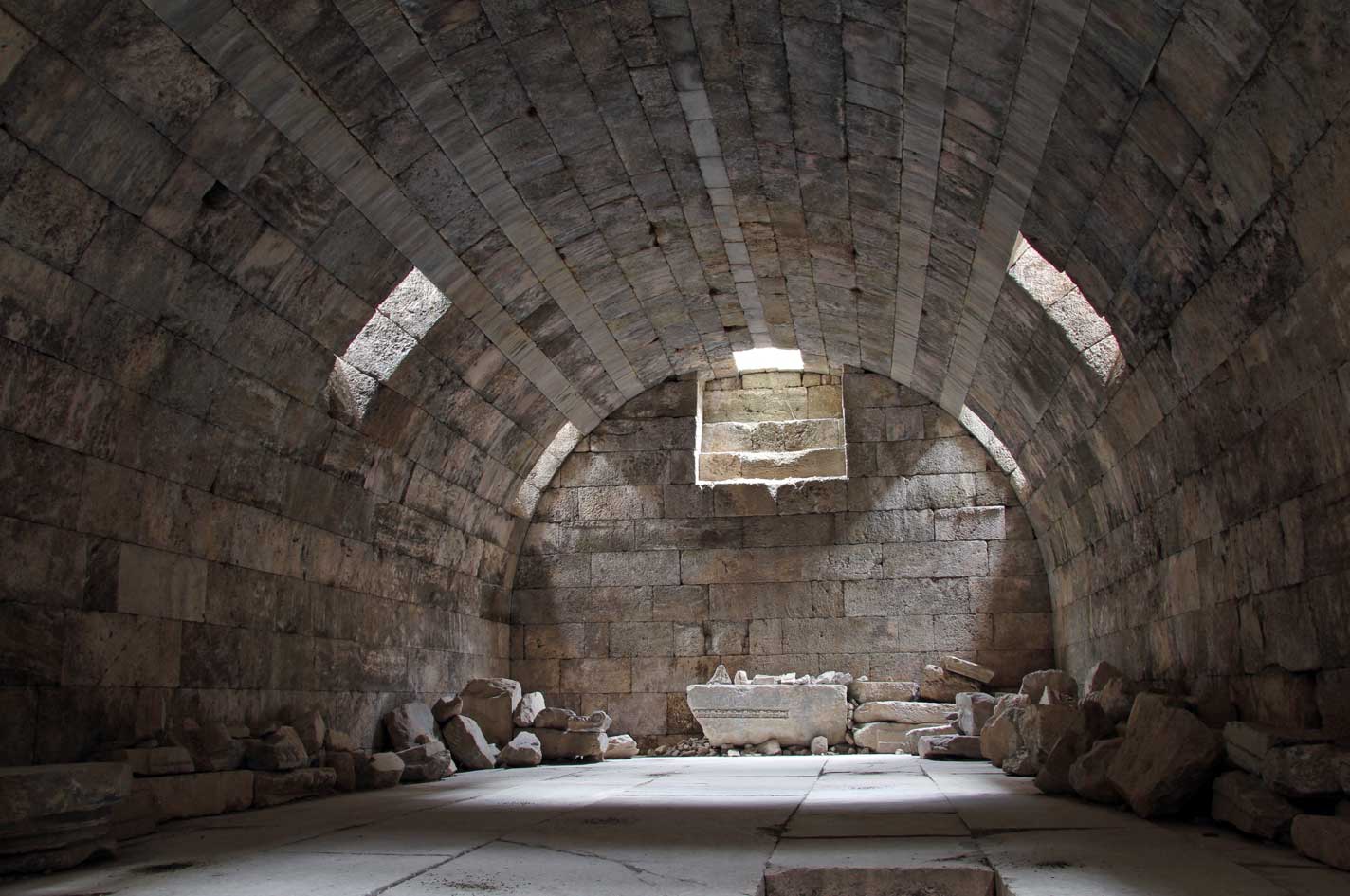