The city of Ani, located on the high East Anatolian plateau, about forty two kilometers East of the city of Kars, was one of the most impressive settlements of the Medieval Period. The ruins of Ani occupy an approximately triangular site between the Arpaçay river which forms the border between Turkey and Armenia and one of its small branches called Alaca or Ani stream.

Although there is little information regarding the foundation of the city of Ani, the region was settled during the Urartian periods in the first half of the first millennium BC. After successive disputes between the Greco-Romans and Parthian-Sassanian states of Persia, the region of Ani was captured by the Kamsarankan Dynasty who built a citadel and a palace there in the fifth century AD.

Ani was conquered by the Arabs in the middle of the seventh century. After the battle between Arabs and the Kamsarakans, Ani was handed over to another Armenian dynasty: the Bagratides, who consolidated its power by uniting feudal principalities at the end of the ninth century. Although Bagratid King Ašot I (884-890) established his capital at Kars, King Ašot III (953-977) transferred the court from Kars to Ani in 961. It was during this period, (963-964) the inner walls of the city were constructed. With its new status, the city was enlarged and transformed from a fortress into a royal residence and capital of a kingdom. The king Smbat II (977-990) built the second line of the fortifications. During the reign of King Gagik I (990-1020), the city experienced a paramount prosperity for being the center of the cultural, religious and economic activity. It was during this period the renowned architect Trdat built the Cathedral of Ani and round church mausoleum of St. Gregory of Gagik I.

Following Gagik’s rule, the city was attacked by Georgians, Arabs and Byzantines. The town fell in 1045 to the Byzantines who reinforced the Citadel. In 1064 the city was conquered by Seljuks under the command of Alp Arslan. The impressive mosque of Manucehr which is the first mosque of the Anatolian plateau and the building known as Seljuk Palace located north of the city walls were built in this period.

During the 12th and 13th centuries Ani changed hands several times. After the Mongol invasion in 1239, Ani lost its importance as a commercial center. In the following years, the area remained in the realm of Karakoyunlus, Akkoyunlus and the Ottomans.

Within the city walls, the citadel of Ani is the oldest and most prominent structure which is located on a small hill close a point where the two river beds meet. The small church with its quatrefoil cross plan dating back to 10th century is probably the earliest centrally planned church in the region.

Due to hosting so many churches, Ani gained the traditional title of “the city of one thousand and one churches”. Many of the partially standing churches of Ani are centrally planned, even though various kinds of plans including cruciform, hexagonal and octagonal ones reflect the amazing variety of church plans. Most of these churches such as the Holy Apostles, St. Savoir, and the Church of the Shepherd, were built between the twelfth and thirteen centuries.

The Cathedral of Ani is one of the most important buildings in the site. Commissioned by the Armenian King Smbat Bagratuni II in 989, it was completed by his successor’s wife, Queen Katranidē by 1001. Its architect, Trdat, also participated in repairing the dome of Hagia Sophia in Constantinople.

There are also a great amount of dwellings and other civic buildings such as public baths, stores, aqueducts, bridges and roads as Ani was one of the unique medieval cities densely populated.

Situated in a very special topography, which provided ideal conditions for settlement and defense with its threatening slopes on the east and west sites of the city, Ani had been inhabited since prehistoric times. However, it is in the medieval period that Ani experienced a great prosperity being a political, cultural and economic center. Ani is a unique medieval town with its impressive fortifications, public and private buildings, still standing to great extend, without any modern development.

From the tenth to fourteenth century, Ani was an important trade city situated on the Silk Route extended from China to Europe. The remains of the outstanding structures belonging to this period testify to a spectacular architectural development, resulting from the blend of eastern and western traditions. The site is crucial to the understanding of trade and settlement within a multi-ethnic and multi-cultural framework during the middle ages.

Criteria (ii): Ani exhibits an important interchange of ideas relating to art and architectural knowledge. Ani exerted a considerable influence over the region, as well as beyond it.

Designed by renowned architect Trdat, who is also credited with the repair of the dome of the Hagia Sophia in the second half of the tenth century, the Cathedral of Ani, with its four free standing piers, is one of the most impressive examples of the inscribed cross plan during the early medieval period. Due to the cathedral’s tall, elegant clustered columns, impressive stone vaults and pointed arches; it might have had an influence on the development of Gothic architecture as it was designed more than a century before the Gothic architecture appeared in Western Europe. The Cathedral also displays Eastern influence in its round horse-shoe arches over the niches and doors. Thus it testifies a spectacular architectural development, resulting from an interchange of ideas and building technology.

The church of Apostles is also noteworthy for its stylistic interactions between Christian and Islamic art historical traditions and as a witness for the prevailing tolerance towards different cultures and religions in Ani. Its entrance façade with its muqarnas vaulted bears and Seljuk-style geometric decorative compositions was probably built in the 11th century. The Church of Saint Gregory of Tigran Honents also displays cultural interactions in its architectural design and decorations. The exterior of the church is abundantly decorated with carvings of the Eurasian animal style including bears, lions, monkeys, wolves, dogs, dragons. This style reflects Central Asian origin and similarities can be found in late 12th century built Emir Saltuk tomb in Erzurum.

Ani bears exceptional testimony to the Armenian cultural, artistic, architectural and urban design development as a whole. However, Ani was also the center of a multi-national and multi religious population which had come from Caucasia, Central Asia and Mesopotamia during the middle ages. Ani is also important to Turkish and Islamic for hosting the earliest mosque in Anatolia.

The urban enclosure of Ani is an outstanding example of architectural ensemble which illustrates significant stages in the military, architectural and technological history due to its monumentality, design and quality. The stone walls of the city, with double fortifications strengthened by semi-cylindrical towers and massive stone surfaces offer an impressive view of the city. Carefully designed through the selection of strategic sites, the practice of incorporating round towers into the wall system and the use of angled entrances make the fortresses almost impregnable. Ani’s walls were built with the local volcanic stone called tufa which provides a lighter structure with the same strength. A structure which can not only stand earthquakes but also absorb medieval shelling. What is more, it is very difficult to establish paralleles with Ani’s walls’ impressive decorations including the patterns of checkerboard designs, horizontal bands and crosses made with black stone blocks.

Ani is under protection by the Turkish Legislation for Preservation of Cultural and Natural Property, Law No.: 2863. Erzurum Regional Council for Conservation of Cultural and Natural Heritage registered the site as 1st degree archaeological site with the decision dated 22.10.1988 and numbered 115. The revision of this decision was made in 22.09.2010 and numbered 2004. The conservation plan of the urban site has been prepared by Ministry of Culture and Tourism.

Following the Mongol invasion in the thirteenth century and due to devastating earthquakes, Ani was totally abandoned at the beginning of the fifteenth century. It was rediscovered in the nineteenth century and attracted scholarly attention. The first archaeological excavations were launched in 1892 by Nicolass Marr, on behalf of the St. Petersburg Academy of Sciences. Between the years 1989-2005 the excavation in Ani was conducted by a group of Turkish scholars under the direction of Prof. Beyhan Karamağaralı from Hacettepe University Ankara.

Until recent decades, the surviving structures of Ani were in a state of deterioration caused by nature and human factors. In addition, some of the churches were subject to restorations with some problems. Ani was listed in 1996 by the World Monument Fund as one of the world’s most significant and endangered sites of universal cultural importance. In recent years, the Ministry of Culture and Tourism initiated a comprehensive restoration work using the recent developments in measured drawings, preservation and restoration techniques. Within this framework, a group of Turkish and international experts have conducted some research at the site and set out a comprehensive preservation and conservation strategy for Ani’s architectural remains with the financial and technical assistance from the World Monuments Fund. In addition, the Management Plan for Ani has been accelerated in recent years.

Ani does not stand alone, the thousands of artifacts found in Ani during the late nineteenth and twentieth century excavations show strong connections with Persia, China, Byzantium, Central Asia as well as Europe. In addition, the architectural remains of Ani can be compared individually with other buildings particularly in the region of Caucasus and in eastern Mediterranean areas. For example, King Gagik’s Church of Saint Gregory built in 1001 by architect Trdat was apparently modelled on the cathedral of Zvartnots that was built in the mid-seventh century. The architectural plan of the churches of Ani can also be traced in many Byzantine churches. Yet, as an early medieval town with its own intrinsic value, Ani is in many ways a more integrated and coherent town. Ani has a special place in the history of medieval art and architecture. 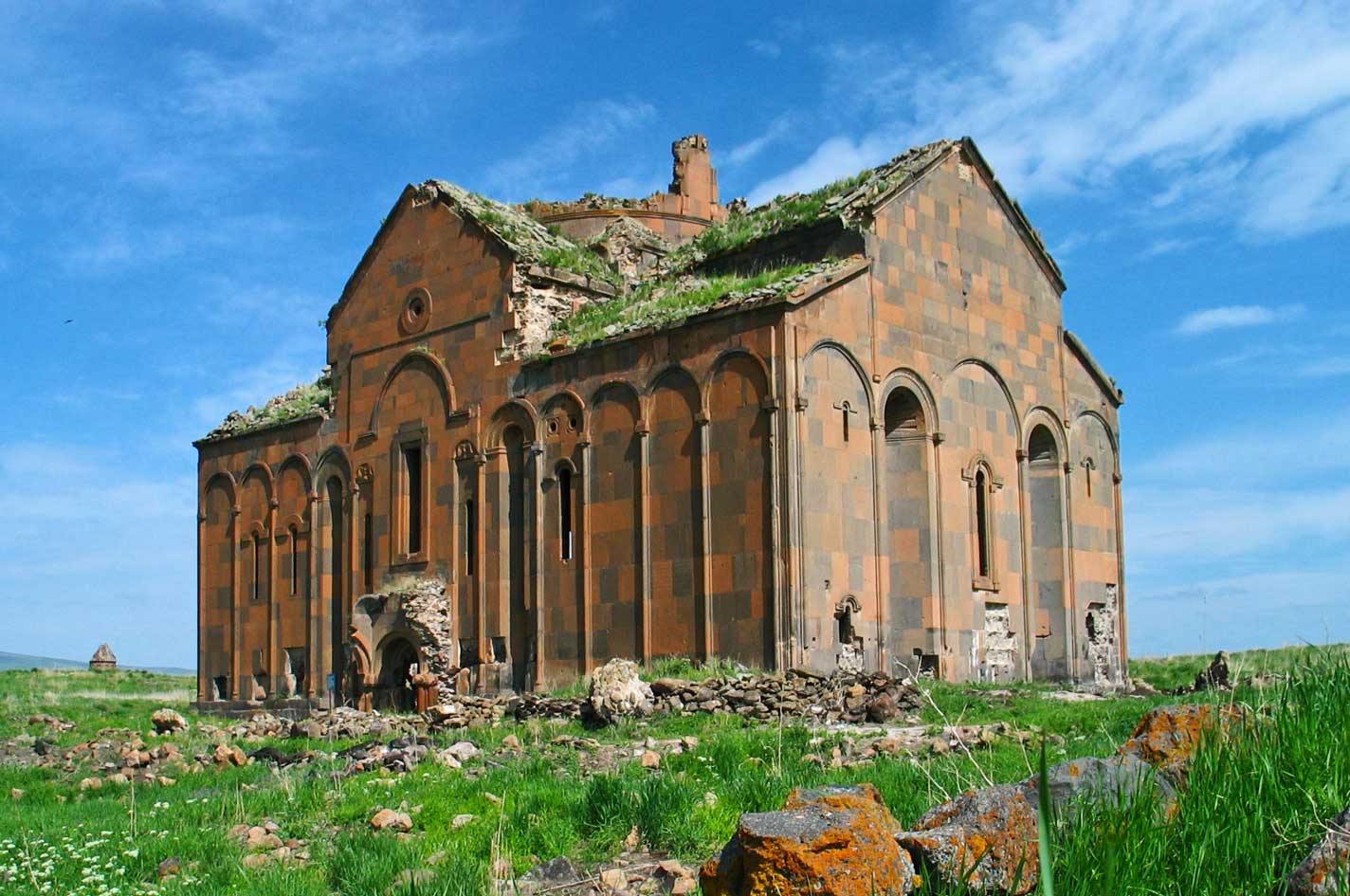 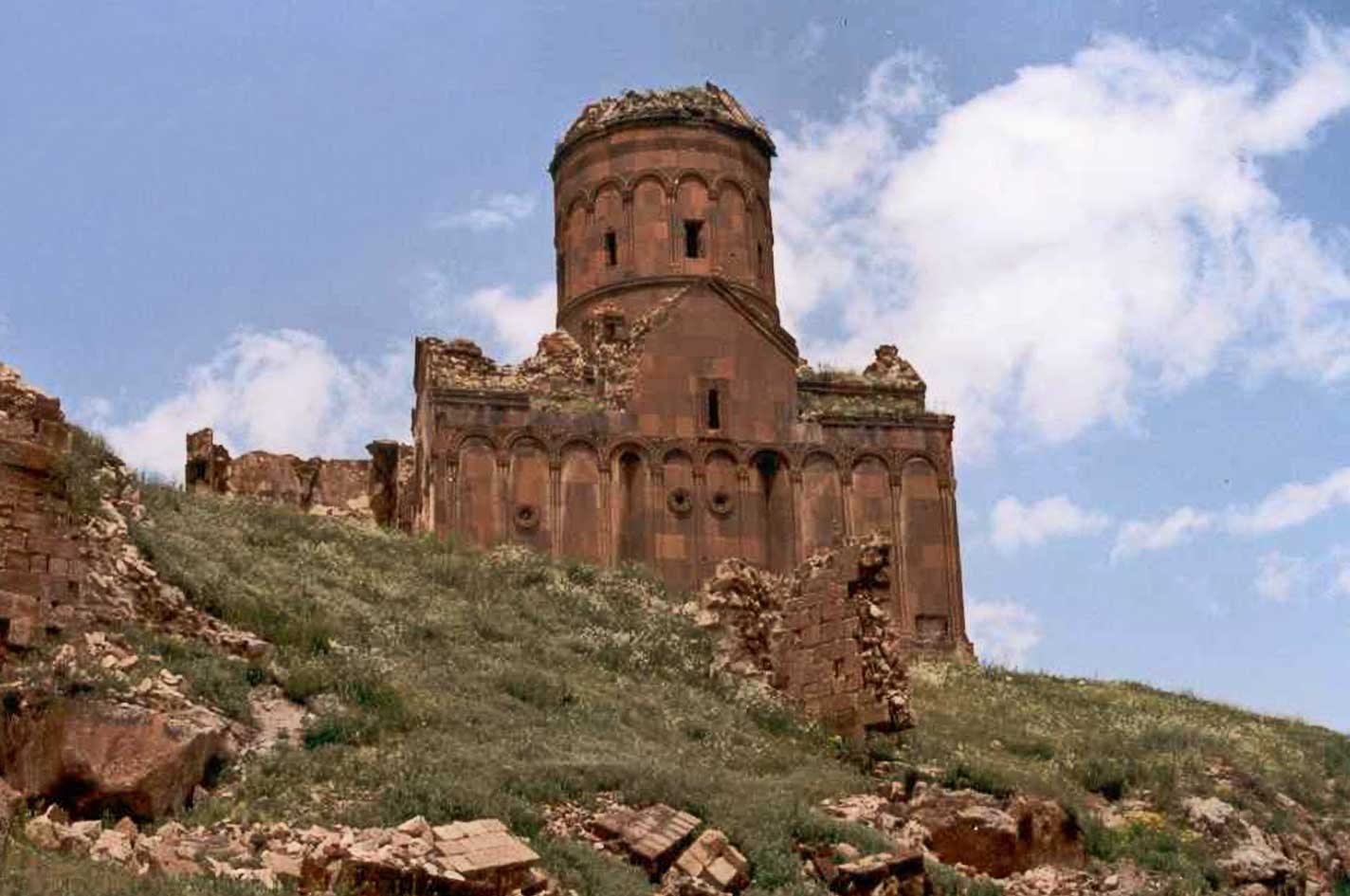 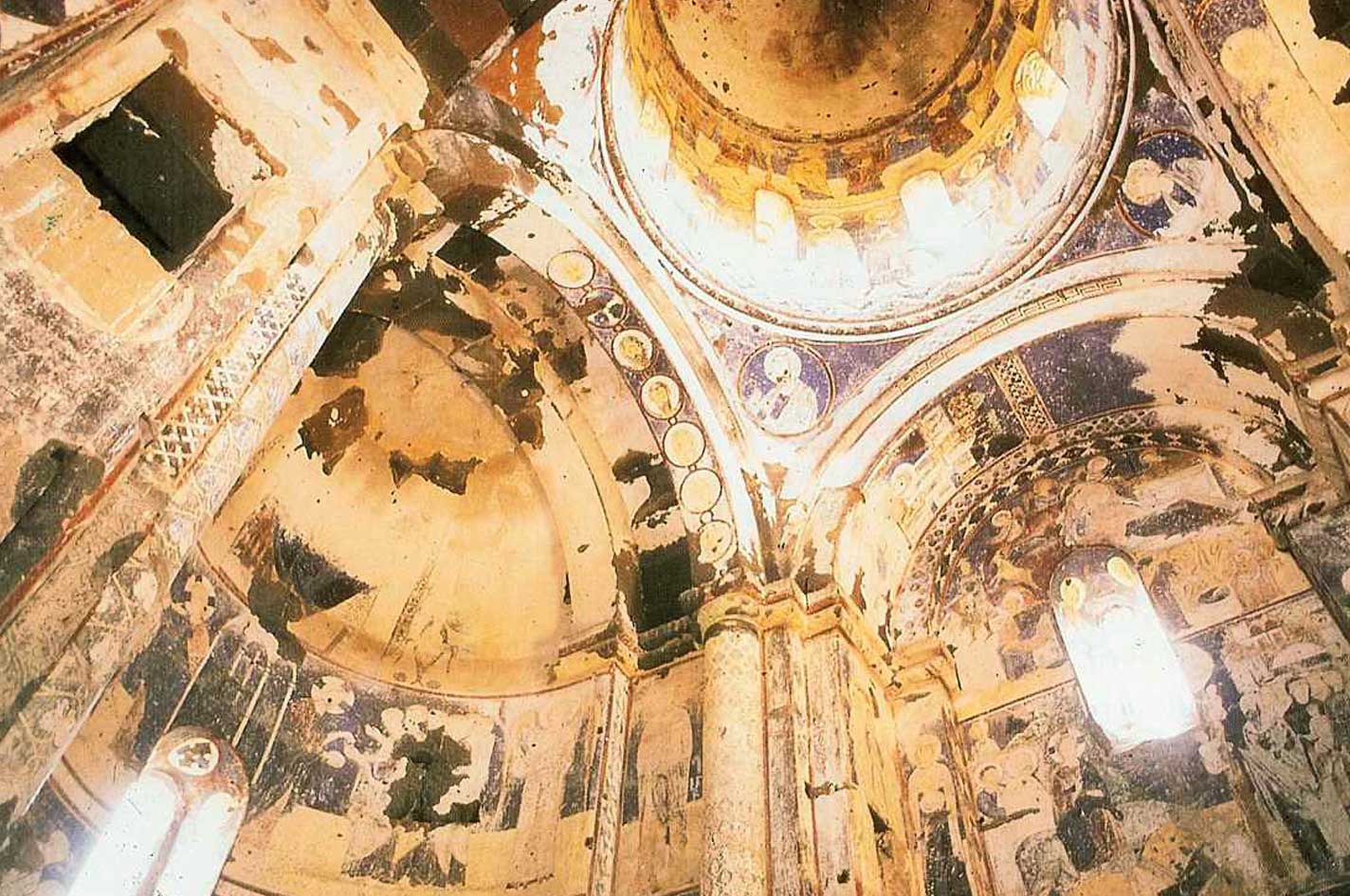 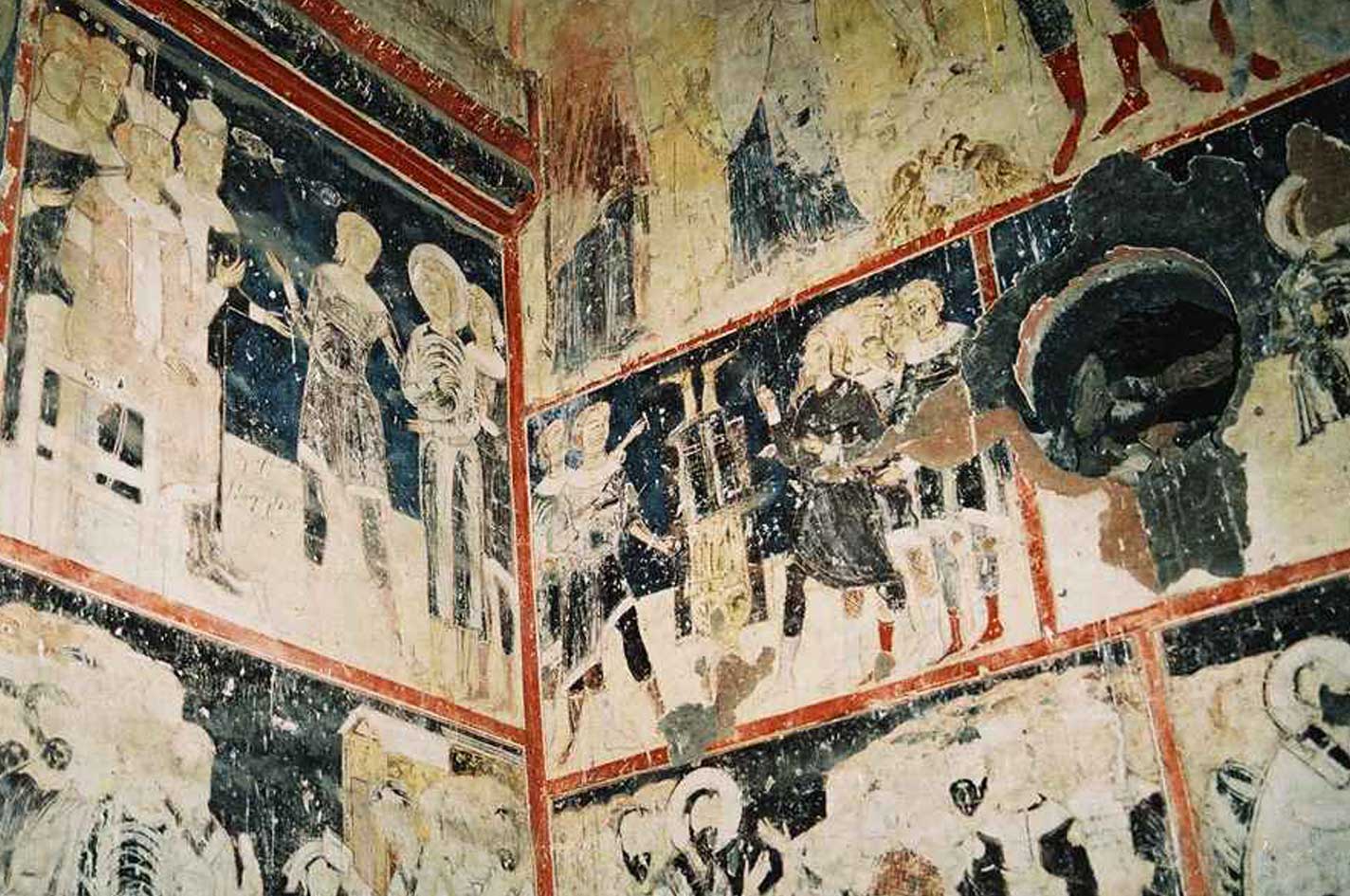 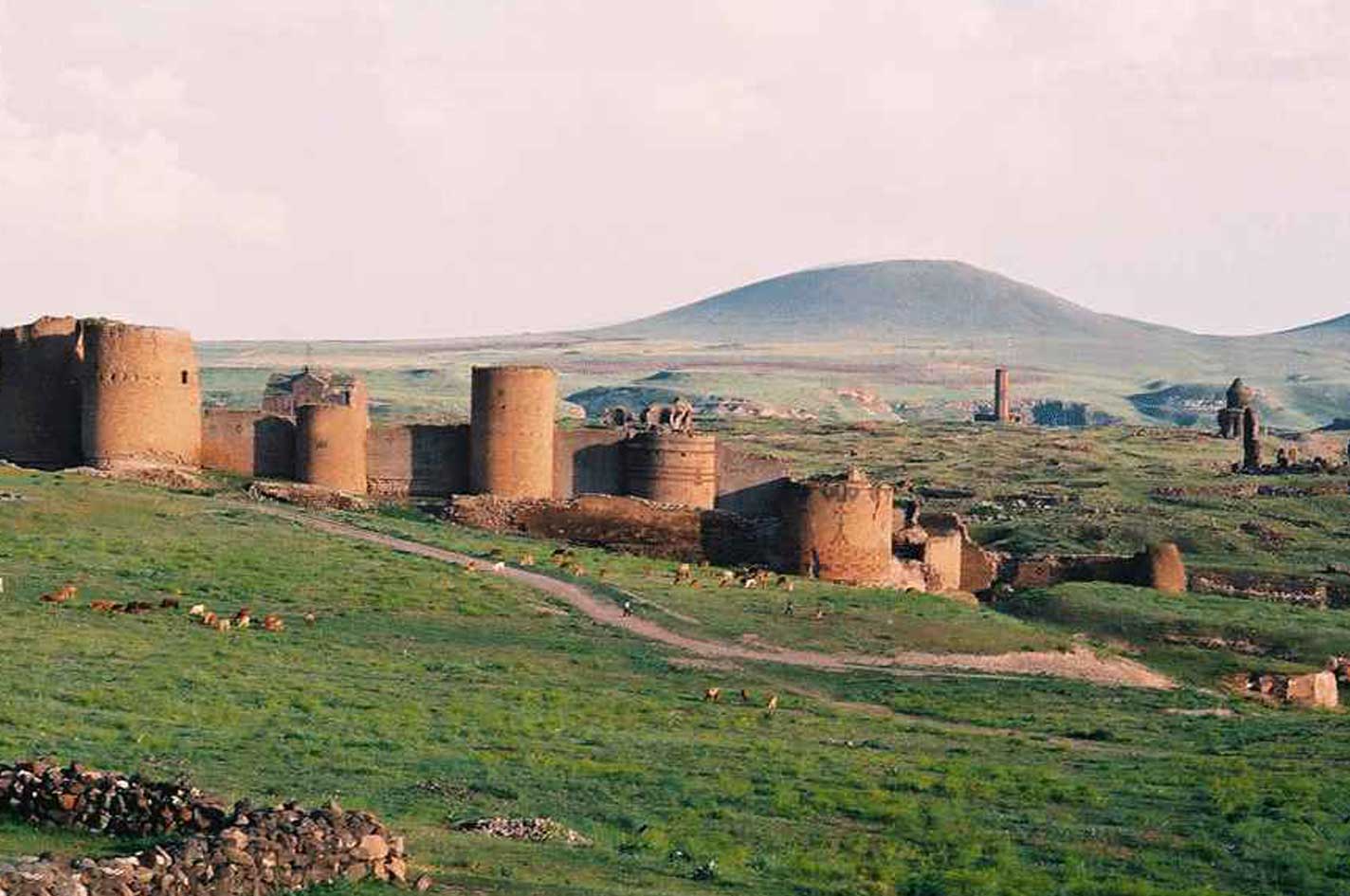